Next time you're at the shop, I highly recommend you take a few extra minutes to stroll over to Stoneway between 45th & 44th. On the west side of the new apartment building, you can soak in the site-specific stylings of LA street artist, Bumblebee's latest work. Commissioned by the Mack Urban development group, Bumblebee was flown up for a two week painting stint. The results are well worth the stroll. (The mural is too hard to see driving by on the street. Your best bet is to stand in the Walgreens parking lot and look east.) A four story, two piece blast of playful color awaits your eyes. 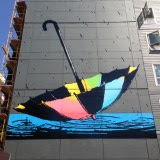 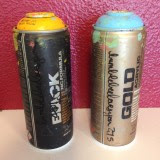 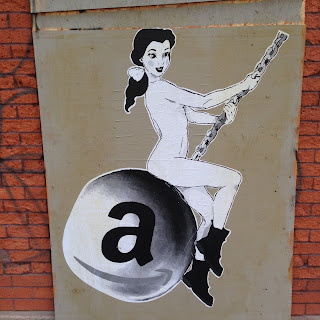 A bit of provocative street art from the bustling blocks of Ballard Avenue. On an abandoned building across the street from the Hotel Ballard and Stoneburner. To me, it says Amazon is wrecking/changing the face of the city, yet it remains veiled in the fleeting beauty of a pretty pin-up girl. The vibrance is alluring, but the dramatic changes could prove destructive. What does it say to you?
Posted by Spin at 9:03 PM 19 comments:
Email ThisBlogThis!Share to TwitterShare to FacebookShare to Pinterest

The other weekend, I was strolling down an alley in Montlake with my friend, Casey and our respective kids. As I looked to my right, I spotted these bricks - part of an exposed and well-aged retaining wall. I'm not sure why I was so taken by these bricks. Partly their unique shape, partly the way the light was hitting them, and partly the newness of the little green bits foliage sprouting from something so visibly old. I quickly snapped a photo, and we continued on our way to the park. As I look at this shot, I think, man, I like these bricks. 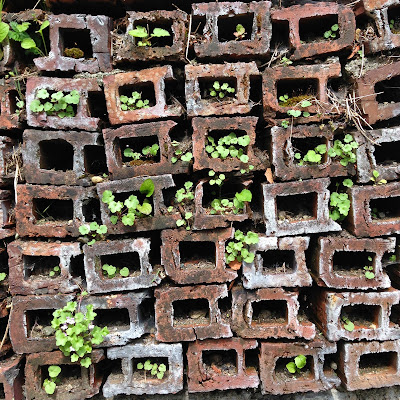 Posted by Spin at 12:07 PM 10 comments:
Email ThisBlogThis!Share to TwitterShare to FacebookShare to Pinterest 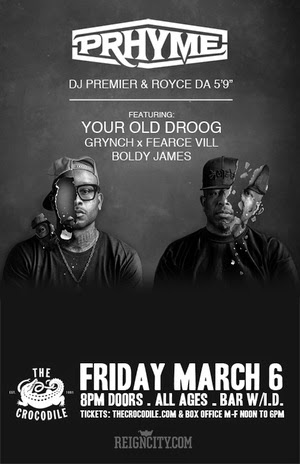 It's been a while, but I wanted to let you all know about the incredible show I saw at The Crocodile just last Friday. Some local cats opened, a kid from Brooklyn held it down with fantastic breath control and some great punch lines, and then a couple of authentic hip hop practitioners took the stage. DJ Premier & Royce the 5'9" have worked together in the past, and now have recorded an album together, and are touring to support said album. Together they are "PRhyme." And as this dynamic duo, they share a philosophy and reverence for purity, and bring that to their music - and to the stage. Primo flexed his muscles on the wheels of steel, while Royce paced the stage like a panther, spitting to a sold out crowd. The best part was my cousin and I brought along his 14 year old son, who has a budding interest in hip hop, and was excited to take in his first live show. As far as fist shows go, this was a heck of a maiden voyage.
Posted by Spin at 11:00 PM 18 comments:
Email ThisBlogThis!Share to TwitterShare to FacebookShare to Pinterest
Newer Posts Older Posts Home
Subscribe to: Posts (Atom)